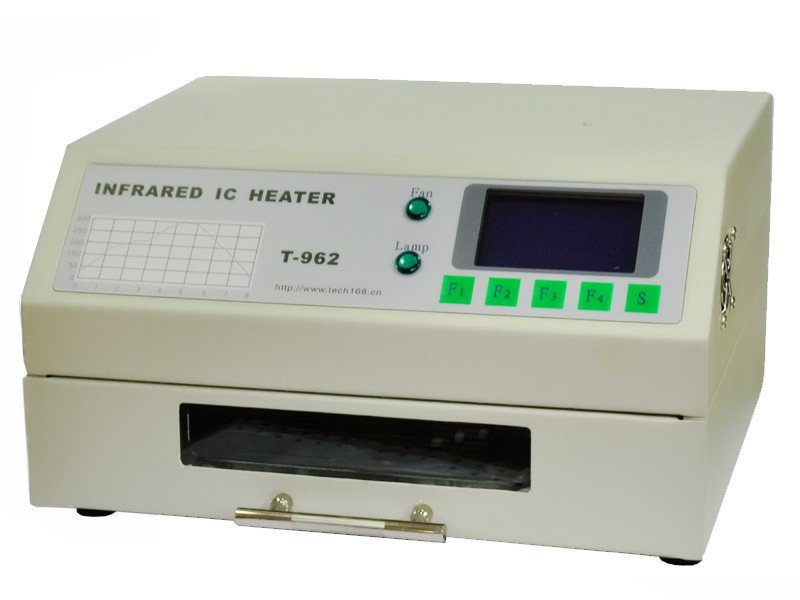 After spending the last three years building small circuits here and there and doing so using the skillet reflow method, I decided it was time to step up my game and bought one of those cheap, Chinese reflow ovens: a T-962. 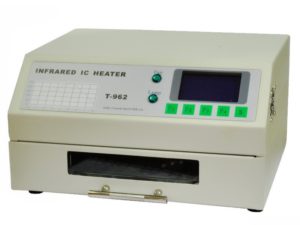 Now, let me start off by saying that I knew what I was getting into. I’ve been reading the reviews on all three styles, the T-962, T-962A, and T-962C (apparently the Chinese don’t believe in having a ‘B’ version.) Just about every review would talk about the poor heat distribution as well as the poorly designed display. So I knew what to expect (or not to expect.) But it’s an oven, electronically controlled. This meant that I could also hack it and potentially fix some of its problems, or at the very least improve upon them.

After unpacking the thing and looking it over for any obvious signs of stress, the next step was to tear it open. One of the things everyone is complaining about is some horrible smell coming from the unit while it’s working. That smell got attributed to it having a layer of what appears to be masking tape on the outer insulation blanket. So I wanted to see if this unit also had it. Sure enough. Over the insulating blanket is a metal shield and then the electronics. Because the shield comes rather close, the manufacturer decided it was okay to use masking tape to cover a portion of the shield and therefore protect the electronics from touching and shorting out. The adhesive on this tape is what’s causing the horrible smell. After a few minutes of peeling it all off and replacing it with Kapton tape, I buttoned the thing back up and fired it up. Hey, it’s still working!

Of course the next step was to reflow something. And I had a few boards that I hadn’t done yet, so why not throw them into the fire. Looking through the pre-loaded profiles, “wave3” turned out to be the closest for the lead-free solder paste I’m using. After populating the boards, I placed them in and went for it. According to the display, a little under 8 minutes later, it was done. The boards came out and voila, done. I let them cool, connected my trusty Atmel AVRISP mkII and much to my satisfaction, there they were. They were properly read by Atmel Studio, I was able to set the fuses and even upload a test sketch and watched a 48-pixel LED strip come to life. Yay!

Considering the boards were a mere 21×10.5mm, it was obvious that wasn’t a “good enough” test. I decided to go for broke and populated one of my custom LED strips and tried reflowing those. Half way through the process I realized something’s wrong. Something’s definitely wrong. I waited till the cycle was done and pulled the board out: 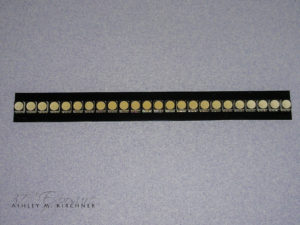 After all that I’ve read about these ovens, this wasn’t a total surprise. The center LEDs are cooked. This clearly indicates a hotspot problem. And since the oven doesn’t have any way of circulating hot air, this is to be expected. I have also since discovered that while the profile was “okay” for the paste I’m using, it’s too high for the LEDs themselves. I need to lower the temperature by some 20-30 degrees!

On to hacking! After cooling, I tore the oven open again in preparation to perform a hack as explained by this awesome instructable. Basically it allows you to control the cooling fan that’s in the back of the oven and use it to get some air circulating while it’s going through a cycle. I had one burning question but I decided to just proceed with the hack. It’s not like it’s a permanent thing nor that I can’t disable it once it’s in place. So really I had nothing to lose.

First things first: every single possible screw and connector was covered with hot glue! What’s up with that? I understand the need to keep things from disconnecting but except for two connector, everything has a lock on them, whether it was a friction lock or actual latch. And of the two connectors that didn’t have them, one was a dual-row one for the LCD connected to a shrouded header. Friction alone will hold it in place. And the other was the connector for the panel buttons. With the ribbon cable as short as it was, it too wasn’t going anywhere. There’s no vibrations going on so it’s not like any of them could simply vibrate loose. So again, what’s the hell?? It took me a little over an hour to get the hot glue removed just enough to unscrew the board and to carefully pick and peel away more glue so I could remove the connectors. What a pain!

Once I finally got the board out, it was time to identify all the bits and pieces on it. I was surprised to find the “brains” to be an LPC2134 ARM micro controller. A bit of an overkill if you ask me. You can also see the shoddy craftsmanship, if you can call it that, on at least two of the components:

Since I haven’t done anything for an ARM micro controller yet … or ever, and seeing as I don’t have any tools to either write or hardware to upload code to one, I don’t think I’ll be doing any reprogramming on this. I will likely either buy a different controller, or roll my own. There are advantages to both. That’s a post in and by itself.

Anyway, now that I know what this thing has for brains, and studying the internals, I have a better idea of how this oven is put together and what makes it tick. After following the instructable I had the necessary connections made and wired up on an external AVR micro controller. I was ready to start messing with the fan! 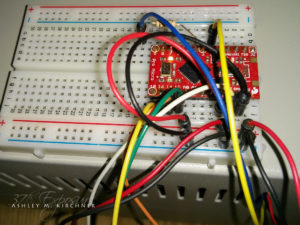 After making a few cosmetic changes to the provided code and loading it onto the external microcontroller, I fired up the oven and waited to see what would happen. There was nothing in it and I just ran the same “wave3” profile. Oh dear! It could not reach its target temperature, no matter how hard it tried. By the time it reached reflow stage, the target temperature was somewhere around 220°C while the actual temperature was hovering around 185°C. The fan was sucking in too much cold air. Again, no surprise there. The hack is to gain control of the cooling fan. So it’s doing what it’s designed to do: cool the oven! The OP of that instructable talks about running the fan at a really low speed, just enough to get it spinning so you can get air circulating in the oven. But by doing so, it’s sucking in cold air from the outside. But I digress, I changed the settings and slowed the fan as much as I could without causing it to stall. After all it’s a heavy, all metal fan. It needs some umph to get going. After dialing in the numbers, I decided to plot the results:

(Heat ON/OFF, Fan ON/OFF, and PWM Fan ON/OFF are simple indicators of when they were ON or OFF)

Not pretty. It’s loads better than the original code which has the fan spinning even more, but still. It never reaches the target temperature during the reflow stage. It has a very slow ramp up and crazy overshoots every time the heating elements (and therefore the fan) would shut off. I needed to do more testing to figure out what would work. The circulating air needs to be of the same temperature as what’s already in the oven, not cold outside air. But I needed a baseline first. I made some changes to a custom profile and decided to run that. First as-is, without fan control. Then a second time with fan control and the intake vent open (sucking in cold air), and a third time with the vent covered up. Et voila, the charts:

The first one gave me what I was expecting, a “close enough” cycle, except no air circulation. The next one, also expected. It’s sucking in cold air causing all kinds of fluctuations and not reaching reflow stage. Then I ran the third setup and was pleasantly surprised. While the ramp up is still somewhat slow (which is probably because the vent wasn’t completely sealed), it still way better than the previous run. Even the cool down phase has less spikes on it. Or at least, less prominent. We’re getting somewhere!

Next step is to adjust the profile so it doesn’t take 12.5 minutes of real time, but the actual 8 that it’s supposed to. The display says 8 minutes, however it’s actually running much slower, a ratio of about 1:1.5, meaning 1 minutes of real time is more like 1:30 on the oven. I will blame the programming for that. Just watching the display you can tell it’s not running “on-time”. And since I don’t plan on reprogramming the thing from scratch, I will have to adjust the profile itself. That will cut down on the length of time spent in the reflow stage. Right now it’s spending 50-55 seconds above 212°C which for the LEDs is not good. It should be in the 30 seconds range.

There are other issues, like the LCD not properly getting cleared when characters move. There are left over pixels that aren’t cleared. And the panel “buttons” don’t register properly. Sometimes you have to hold them down for 2 or more seconds for them to register. A ready-made replacement controller will run roughly the same price as the oven but the advantage is that I can have it now. Rolling my own means I can custom make it, but that will take time …

So there’s the first adventure. On to the next …